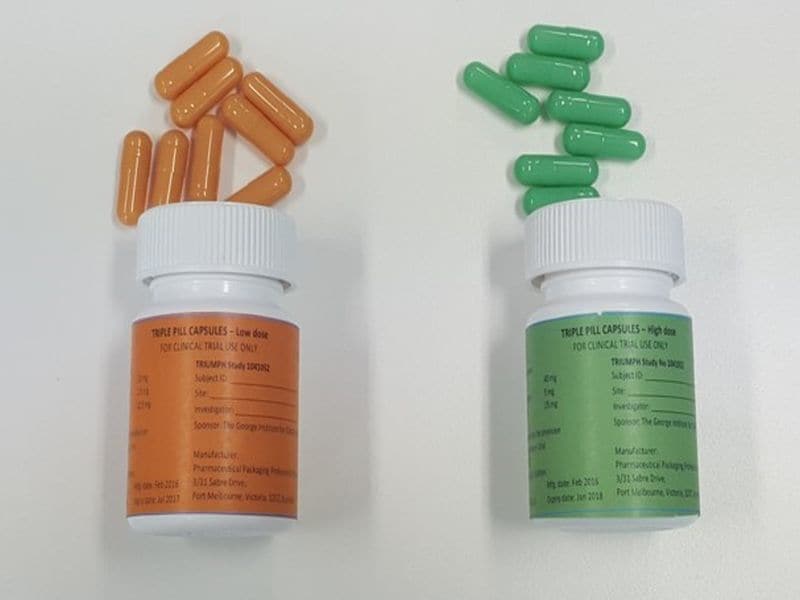 Target blood pressure for people in the United States is now 130/80, according to the American Heart Association and the American College of Cardiology.

The heart health associations brought the target down from 140/90 following research showing that people in the 130-139 range carry a doubled risk of heart attack, stroke, heart failure and kidney failure.

“In my cardiology practice, I would say it’s the rare person who’s on a single drug — 80 percent of folks are on multiple drugs, two or three,” said Bufalino, senior vice president of the Advocate Cardiovascular Institute in Naperville, Ill.

A combination therapy with low doses of medication has great potential because it provides the most bang for the buck while reducing the risk of side effects, said Dr. Mark Huffman, an associate professor of preventive medicine and cardiology with Northwestern University’s Feinberg School of Medicine, in Chicago.

“By adding multiple drugs together at lower doses, you increase chances you’ll get a good blood pressure-lowering effect that is tolerable for the patient,” Huffman continued.

“It’s hard to talk somebody into taking three drugs — three sets of pills and three prescriptions and they all feel like they’re overmedicated,” Bufalino said. “Whereas a combo drug like this with a single pill, you’ve covered them treating their pressure without them having the burden of taking three sets of drugs.”

The Triple Pill contains three different types of medication commonly prescribed to people with high blood pressure — a calcium channel blocker that relaxes blood vessels, an angiotensin II receptor antagonist that keeps blood vessels from narrowing, and a diuretic that prevents the body from absorbing too much salt and retaining fluid.

Webster said that the researchers combined a half-strength dose of each of these three medications into a single pill.

About 700 patients in Sri Lanka were randomly assigned to take either the Triple Pill or receive standard blood pressure care, which generally involves starting out with one medication and then either increasing the dosage or adding other drugs until blood pressure lowers, Webster said.

“Traditionally, patients begin treatment with one drug at a very low dose, which is increased over time with additional drugs added and increased in dosage to try to reach target,” Webster noted. “Patients are brought back at frequent intervals to see if they are meeting their targets with multiple visits required to tailor their treatments and dosage. This is not only time inefficient, it’s costly.”

By six months, 83 percent of study patients in the Triple Pill group were still taking the combination pill with no change in dosage, the researchers reported.

On the other hand, two-thirds of people in the usual care group were still taking just one drug, while 29 percent had been prescribed a second drug.

The Triple Pill patients had similar numbers of adverse events compared to the patients receiving usual care, Webster said. There also was no difference in the number of people who stopped taking their medication due to side effects.

A triple-drug blood pressure pill currently is available in the United States, but it contains a higher dose of medication and is aimed at people with hard-to-treat high blood pressure, Huffman said.

“As the evidence mounts, I think there will be some pressure on pharma to develop a drug” for the U.S. market similar to the Triple Pill, Bufalino said.

Such a drug might not be limited to three medications, either. Huffman is part of a clinical trial looking at a four-drug combination that uses even lower doses.

The Triple Pill trial results were published in the Aug. 14 issue of the Journal of the American Medical Association.

The American Heart Association has more about high blood pressure.