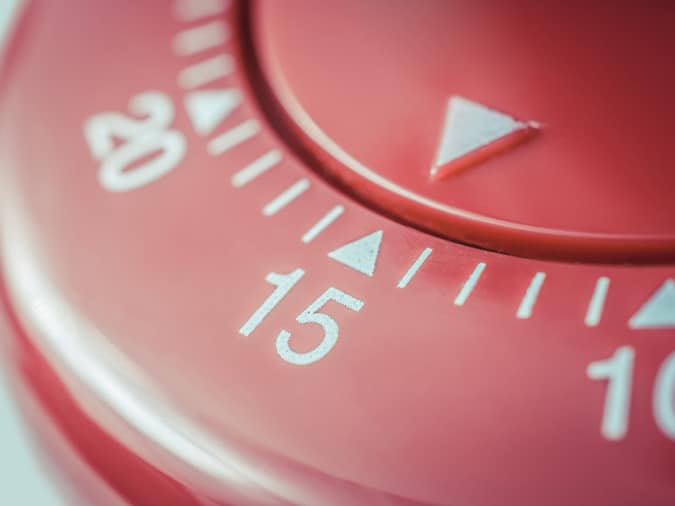 A recent article on FoxNews.com3 about a new research study clearly lays out the relationship between the time a person starts experiencing stroke symptoms and the time they start receiving medical care (called time to treatment) and better patient outcomes. “Outcome” is a word used in the medical community for the condition the patient is in after medical treatment, and the degree to which they recover. Medical outcomes cannot always be measured concretely, but in stroke recovery this is possible, to a degree. Physicians measure stroke recovery outcomes in three areas: body function, activity, and participation.

Time to treatment makes a big difference when it comes to outcomes for people who experience a stroke. In the study, published in The Journal of the American Medical Association (JAMA), researchers reported that treatment administered just 15 minutes sooner resulted in 15 fewer deaths per every 1,000 patients.1

The study was large, as clinical trials go, with 6700 participants. The mean age of participants was 69.5 years, and 51% of the group were women. The study was conducted by researchers from the Los Angeles David Geffen School of Medicine (University of California), and focused specifically on acute ischemic stroke (AIS). Acute ischemic stroke occurs when blood flow to the brain is interrupted by either plaque or a blood clot, and is the most common type of stroke.

The findings support earlier research in this area, but also defined specifically what outcomes were considered to be attributable to the faster time to treatment. Here is what the study statistics show:

For every 15 minutes shortened between the onset of stroke symptoms to treatment:

While the percentage gains may seem small, 795,000 people have a stroke in the U.S. every year2, meaning every 15 minute interval saved will prevent 7950 deaths every year. That’s a lot of grandmothers, grandfathers, and other loved ones who will live to see another day. In addition to the fast action needed on the part of medical professionals, the research also highlights the importance of people recognizing and taking fast action when they or someone they love is having symptoms of stroke.

There are two important time segments in the treatment of strokes. The first is the time from the onset of stroke symptoms to treatment, and the second is from the time of arrival at the hospital to treatment. People who suspect they may be having a stroke might be tempted to wait until they can reach their personal physician to discuss what they should do, but this delay can have lasting impact on the outcome of rehabilitation after stroke. Stroke patients may also be tempted to drive themselves to the hospital or have a loved one drive them to the hospital—this could also be a mistake. Some hospitals are simply not equipped to perform a common stroke treatment known as a thrombectomy procedure, where a blood clot is removed from a blood vessel. The removal of the blood clot is the treatment needed to get blood flowing to the brain again, and if the hospital isn’t equipped to perform this procedure, the patient will need to be transferred to another facility where the procedure can be performed. Calling an ambulance for a person suspected of having a stroke removes the likelihood of this time-wasting mistake. Ambulance personnel will either know which hospitals can perform a thrombectomy, or they can communicate with area hospitals to confirm where the stroke patient can be treated the fastest.

“With regard to patients arriving in the hospital and the time to treatment after that, that’s entirely within the hospital’s control,” explained Dr. Reza Jahan, the co-lead author of the study and professor at the Ronald Reagan UCLA Medical Center.

“They have control of that, they have processes in place to expedite that, and so on and so forth,” Jahan told Healthline. “But onset to treatment, part of that is outside the control of the hospital.”

Know and act on the signs of stroke

We depend on hospitals to improve their systems and capabilities to make emergency treatment the very best it can be for stroke patients, but the thing to remember is that getting the patient to the hospital as soon as possible is critical, requiring people to know and act quickly on the appearance of symptoms. Stroke symptoms can be baffling, because the person with the sagging face or speech problems may insist they feel fine and there is nothing wrong. Strokes don’t hurt, like a heart attack or a broken bone. A third party who’s present may have to overrule the insistence on the part of the patient that medical attention isn’t needed.

“If you have some numbness or weakness in your arm, that doesn’t hurt. Heart attacks hurt,” explained Jahan.

The acronym FAST was developed in the UK by a group of stroke physicians to help people not only recognize the symptoms of a stroke but reinforce the fast action needed to receive critical medical treatment.4

People who recognize one of these symptoms in themselves, whether it’s a numb arm or a drooping face, should call 911 immediately. As stated above, the action of a friend or loved one mean the difference between life and death for someone experiencing a stroke.

“They can produce very severe neurological problems like paralysis, but because it affects the brain at the same time, that can impair the person’s ability to recognize that anything’s wrong,” said Dr. Richard Libman, vice chair of neurology at Long Island Jewish Medical Center in New Hyde Park, New York.

“A person can have complete paralysis and crash to the floor, but then if you ask the patient if anything’s wrong, they may say no,” Libman told Healthline.

People should avoid the temptation to call their primary physician, and should just call 911.

“The doctor might say, “Well, come to the office, I’ll check your blood pressure.’ But it doesn’t get the patient to the emergency department quickly, where they need to be in order to be treated,” Libman said.

“It’s not as if there has been no effort in this regard,” he added. “For 25 years, there have been many studies, many efforts to educate the public through lectures, going into nursing homes, assisted living facilities, places of worship, et cetera.”

Jahan cites the efforts made by the American Heart Association and the American Stroke Association to enact programs such as Get with the Guidelines as an example of public education initiatives.

“They emphasize this kind of quality improvement and, in fact, hospitals that had stroke certification had better door to treatment times,” he noted.

“One thing to emphasize is patient education, awareness of the signs and symptoms of stroke, and the importance of calling 911 if you see those symptoms,” said Jahan. “Don’t go to bed and think it’s going to go away, because you may wake up with a much larger stroke if you go to bed with symptoms. That is one thing that is out of our control that is entirely dependent on patient education.”

The other time segment studied by the researchers is the time from when the patient arrives at the hospital and when they receive treatment. In this context, treatment means blood flow is restored to the brain. What the researchers discovered is that when a stroke patient arrives at the hospital, they are not always seen immediately by a doctor, and there are many factors that influence this time segment.

Patients who arrive during the overnight hours and weekends didn’t receive treatment as quickly as when they arrived during the busy daytime hours.

“It could be the fact that many hospitals don’t have enough personnel on-call for stroke treatment,” said Jahan. “Each hospital needs to look at their own data and look at their numbers. If hospitals are delayed on the off-hours, every hospital now has to do a root cause analysis to see what their issues are and why there’s delay to treatment.”

“We’re trying to change the systems of care for stroke patients,” said Jahan. “So if a patient is recognized out in the field by the EMS to be having a severe stroke, they should be taken directly to a hospital that’s capable of the thrombectomy procedure.”

2 The Centers For Disease Control and Prevention, https://www.cdc.gov/stroke/